Share a memory
Obituary & Services
Tribute Wall
Read more about the life story of Gerard and share your memory.

Gerard, Gerry, was infinitely blessed with a creative, artistic spirit. He dedicated his whole heart and this spirit to his family, his community, and his church.

He was born in Brunswick, on July 5th, 1926, to Odilas and Yvonne Menard. Gerry was the first of 5 children followed by George, Gilbert, Georgette and Gloria. He was born with a “wry neck”, a rare condition of contracting neck muscles which twisted his neck. At the age of 9, he was brought to the Shriner’s Hospital for Children in Springfield, Massachusetts. There he was operated on and treated with special therapy and returned home to a full and active life. This gift of health inspired his commitment to “give” to church and community.

On May 6, 1950 Gerry Menard married the love of his life, Valencia Pinette. They had three children; Elaine, Lucie Lee and Gregory and raised their family on Dunning Street in the home Gerry was raised in. Here they grew as a family through their involvement in St. John’s Catholic church and school, and by participating in many community and family events.  In time, Gerry became a grandfather to Matthew, Adam, Maegan, Mary, Emily and Andrew and a great grandfather to Lola, Gavin and Jude. Few things brought him more joy than spending time with his grandchildren.

“Uncle Gerry” became the patriarch of the large extended Menard family. He was often called the “Commander” due to his knack for organizing and decorating family events. He was loved and cherished by many cousins, nieces, nephews, and in-laws. Gerry and his wife, Valencia, stood by each other’s side for 69 years until Val passed away just 9 months ago.

Gerry was a World War II Veteran serving in a machine-gun squad in Europe during the last year of The Battle of the Bulge. At the end of the war he was assigned to a German prisoner of war camp in Seboomook, Maine, until the prisoners returned to their homes in early 1946. Gerard was a member of the American Legion.

Gerry was an active member of the Brunswick Bicentennial Committee. In 1989 he received the Bicentennial Award, Bicentennial Float Award and took first place for the design of the Bicentennial book cover. One of Gerry’s favorite activities throughout the years was building floats for several parades and celebrations. He presided as a judge for the floats in the Brunswick Memorial Day parades for many years. In 2014, sitting at his wife’s side, Gerry had the honor and pleasure of being Grand Marshall of the Memorial Day Parade. He often referred to it as one of his favorite experiences.

Gerry had a deep devotion to God and was a lifelong parishioner of All Saints Parish at St. John’s Catholic Church. He also actively supported St. John’s School which he, his wife, his three children and four grandchildren attended. He was a Fourth Degree member of the Knights of Columbus. In 2010 he received the Knights of Columbus Grand Knight’s Award and in 2011, the K of C Guertin Memorial Award for 27 years of service to the Knights.

In his later years, Gerry became quite a Patriots fan and watched the game dressed from head to toe in Patriots attire.

Art and creativity were at the core of Gerry’s being and he applied it to everything he did. Early in his life, he designed and built stage settings for the Paradis School of Dance, the stage scenery for the Crusade Capers at the Bowdoin College, musicals for the High School Drama club. For years he designed and trimmed Senter’s store windows and marquis. He relished the annual trips to New York City for the latest inspiration in designs and decorations. For several years, with the help of his friends, he oversaw the altar decorations of St. John’s Church. He designed the nativity creche which is still in use today.

Holidays were especially magical under Gerry’s artistic touch. Christmas’s had grand themes, color schemes, enchanting displays and elaborate trees. Valentine’s Days glittered with red and pink hearts and cupids, 4th of July was festooned with bunting and patriotic splendor. Together with Val’s cooking magic, they regularly entertained family and friends and left us all very special memories.

There will be a private viewing and Mass for the family at 1:00 on Monday, August 31, followed by a burial ceremony at St. John’s Cemetery at 2:30.  Due to Covid restrictions, only the burial will be open to the public. A grand Celebration of Life will be held at a later date when Covid restrictions are lifted. In lieu of flowers, please make donations to St. John’s Church or St. John’s School in Brunswick, Maine.

To send flowers to the family or plant a tree in memory of Gerard O Menard, please visit our floral store. 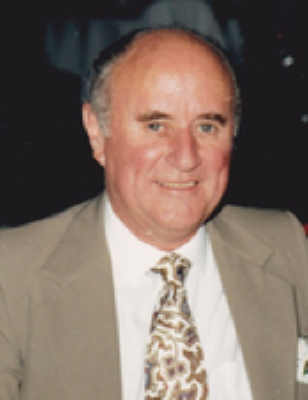